We were tasked by Alun Griffiths Contractors to fabricate and erect 115 tonnes of weathering steel on the five-span bridge that crosses the River Rhondda in Treherbert for Rhondda Cynon Taf Council. This project was in high-demand by its local users and we were happy that investment had been made to future-proof it.

The original bridge was built in the 1930s and, as such, was now in a poor condition. Therefore, as well as improving it, we were keen to save the wider team’s time and energy through a number of ways including fabricating off-site and ensuring materials were long-lasting and efficient to reduce the need for added maintenance and repair costs in the future.

The £400k project took over 5,000 fabricating hours and we value engineered the construction sequence to eradicate the need for temporary support trestles on-site. Girders were pre-assembled in our Pontypool facility and lifted into position from transport to minimise working at height on-site and reduced the site programme.

It required 2,500 tension control bolts to hold the steelwork together and 6,000 shear studs to connect the steel beams to the concrete deck. The work took the dedicated Pro Steel team two weeks on-site to install the 38 bearings and 30 bridge beams.

The weather-proof steel will, in time, produce its own patina, and therefore protect itself from the Welsh rain and inhibit rusting! 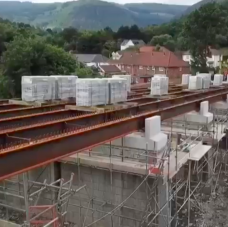 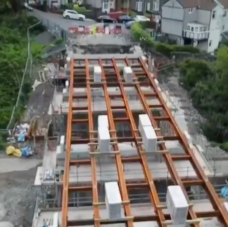