Pro Steel Engineering (PSE) was approached by CIM6 (Costain) after Severn Trent Water Ltd (STWL) identified four freshwater river intakes at the Mythe water treatment facility, that required overhauling works to minimise the environmental impact of STWL operations on the leptocephalus populations. These works would be carried out as a part of the National Environment Programme, Phase 5 (NEP5) and the Eels Regulations 2009.

The steel structure would go on to support the Hydrolox Vertical Eel Screens at the Mythe 1941 and 1964 intake locations. To fulfil this brief, PSE commissioned KGAL Consulting Engineers to carry out the design elements of the project.

Following a briefing meeting PSE and KGAL set to work to meet the clients’ requirements that would also ensure it was easy to install at site. This reduced the need for specialist labour such as divers and rope access. Other limiting factors included that the maximum weight of any single component could not exceed 7.0Te due to restrictions of the size of crane that could be positioned at site.

It consisted of a base frame which sat on the existing concrete apron with two number supporting towers that would house the Vertical Eel screens.

The next issue to overcome was to form a seal between the existing pump house and the supporting structure. This issue was further complicated by the various undulations in the pump house wall. This issued was overcome by a simple detail where several sliding panels with strips of neoprene closed cell foam were bolted in position. This would allow the specialist labour to adjust the panels and seal the gap between the two structures. 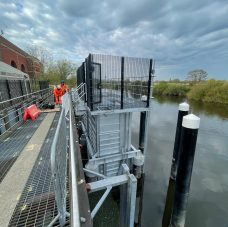 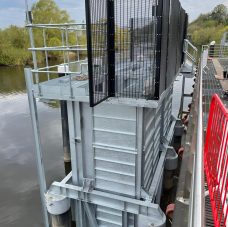 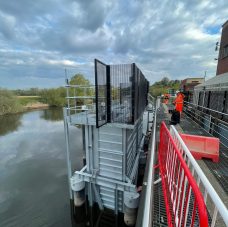 An eel screen structure which would be supported upon six number driven piles was required here. These piles would then support a primary frame, which in turn would support two separate cassettes that would house the Vertical Eel Screens.

Unlike the 1941 intakes, the structure could not be positioned next to the intakes due an existing footbridge, as a result, the piles and therefore the structure had to be constructed the ‘river’ side of the footbridge. This resulted in the gap having to be bridged between the intake chamber and the rear of the support structure by two 900mm diameter inline pipes.

Due to the limited access at both location and the fact that majority of the works had to be carried out by specialist labour, both structures were assembled, trial erected and transported to site in major component form. This in turn ensured that the structure went together without issue, and thus limited the working durations and risks of the specialist labour.