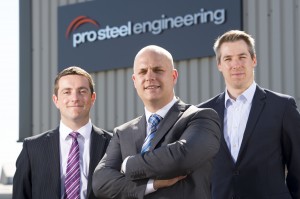 We are thrilled to announce that we have secured a £1 million loan from Finance Wales to complete the high-profile project at the Queen Elizabeth Olympic Park.

We are the first to benefit from capital from the Wales Capital Growth Fund, which was created in response to demand from Welsh SMEs for short-term working capital and performance bond requirements.

With West Ham United having taken a 99-year tenancy of the Olympic Park stadium, the redevelopment – which will create nearly 100 sub-contractor jobs for our team – will see the stadium transformed into a UEFA Category 4 venue, seating over 54,000 spectators.

Finance Wales has also provided additional funds for Pro Steel to expand our operations with a move to a new Caldicot site where we have purchased a new 3,000 sq ft steel industrial unit on Severnbridge Industrial Estate.

The move means we now have the capability to fabricate steel in-house without having to outsource the manufacturing process, enabling clients to benefit from a faster, more flexible service.

We have already worked on a number of major infrastructure projects across the UK includingBirmingham New Street Station and strengthening work on the A4 London Hammersmith Flyover.

We are thrilled to be able to recruit for a number of senior positions in the coming months as part of our ambitious growth plans.

Our business model is committed to sourcing work in Wales and harnessing the talent of the local supply chain, even if the project itself is located elsewhere in the UK.

We are delighted to have secured funding from Finance Wales, which has allowed us to create nearly 100 new jobs at the Queen Elizabeth Olympic Park site. Our commitment to the highest quality of work, and safety levels on site, has ensured that in our first two years of trading, we are already winning sizeable, high-profile contracts across the UK.

We are also thrilled to announce the launch of our new site in Caldicot. As we are rapidly expanding, moving to a new head office allows us to offer a greater level of flexibility to clients.

Our goal is to grow sustainably over the next few years, building strong relationships in the construction sector and winning more high-profile contracts.

“Pro Steel Engineering is a young, highly regarded Welsh business with an impressive management team, considerable expertise and long-term vision. It has already completed a number of high-quality projects and winning the contract to deliver such a key project is an important growth milestone.

“In addition to the injection of working capital from the Wales Capital Growth Fund, an investment from the Wales JEREMIE Fund has helped Pro Steel fund the move to its new Caldicot site, underpinning its expansion. It also plans to recruit additional staff in Wales as it increases the range of services it provides.”

The Minister for Economy, Science and Transport, Edwina Hart, said:

“This is a very exciting project at a key international venue and also an excellent example of how Welsh businesses like Pro Steel Engineering can take on the competition and win significant new contracts with the right financial backing.

“Finance Wales’ first investment from the new Wales Capital Growth Fund is providing the company with the working capital it needs to undertake the project.   Winning larger contracts can not only boost growth prospects for businesses but can also increase their contribution to the Welsh economy.”

Cardiff-based BPU Accountants advised on our loan deals and M4 Property Consultants (M4PC) facilitated the acquisition of our new site in Caldicot.