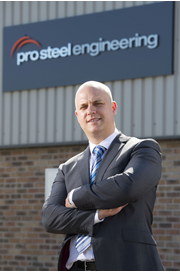 We are thrilled to announce that work has begun to install the steelworks of the new Olympic Stadium roof. Partnered with leading structural steelwork fabricators William Hare and Balfour Beatty, the roof installation is part of the £190m transformation of the east London venue, which is due for completion in Spring 2015 with Premier League team West Ham United set to move to the arena in 2016.

The redevelopment will see the stadium transformed into a UEFA Category 4 venue, seating over 54,000 spectators.  Click here to watch a video created by the BBC, which shows the scale of the roof transformation.

Once strengthened and installed by Pro Steel, the newly installed roof will:

We are delighted to have secured funding from Finance Wales, which has allowed us to create over 150 new jobs at the Queen Elizabeth Olympic Park site and our commitment to the highest quality of work, and safety levels on site, has ensured that in our first two years of trading, we are already winning sizeable, high profile contracts across the UK.

Our goal is to grow sustainably over the next few years, building strong relationships in the construction sector and winning more high-profile contracts.